Why Choose File Savers to Recover Your IMPORTANT Data!

What is a Virtual Machine?

A virtual machine is simply a file that contains a full operating system with programs and files just like a typical computer. Its simply a computer inside a computer.

With the amazing advancements in computer hardware, storage capacities and processing power we have the ability to store more data, run more processes and do more with a single hardware server box. These hardware advancements have opened the door for software advancements to bring us computer visualization. VMware is one of the biggest developers of this type of software today.

VMware is installed on the physical ESXi server box which allows for many new virtual machine files to be created on the root.

Windows Server or your preferred operating system gets installed inside your newly created VMDK file.

Software gets installed inside your new Windows Server or preferred OS.

Additional VMDK files are created at the root of the VMware servers file system and your OS gets installed inside the VMDK. 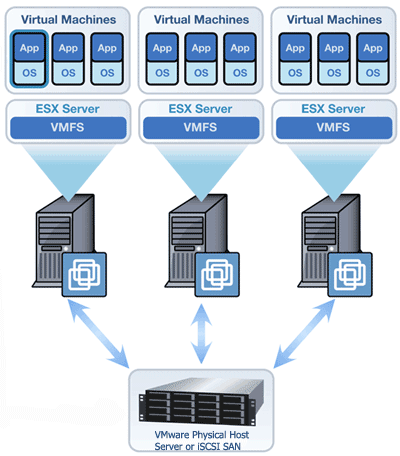 VMware has become the mainstay for domain servers because VMware allows one domain server to hold and process multiple customer accounts simultaneously from a single box. These accounts are often set up as virtual machines on the host computer. One computer can contain multiple virtual machines. This technology has allowed more data to be stored on less computers.

Example 1: A hosting company host dozens of companies data on a single physical server where each company gets their own virtual machine file. To the client, it looks and feels like a typical Windows computer but in reality, there are dozens or more other companies running their data on the same physical server. Each virtual machine gets its own storage partition that is private, safe and secure.

Example 2: A single company employs one physical server box that contains four or more virtual machine files each with Windows Server installed on them.
These servers might include SQL server, Exchange Server, data server containing typical user files and/or a domain server all in one physical box.

This consolidation of data has been a massive step in the computing world with the large amounts of data being stored on computers today. It's also complicated the recovery efforts for data recovery companies since this technology adds an additional layer of complexity to the system.

Why Choose File Savers for your VMware Data Recovery?

File Savers Data Recovery engineers are experienced in dealing with and recovering data from the complicated VMFS file systems and the VMDK files created by VMware. When your organization can't afford to lose your critical files stored on your VMware server, File Savers Data Recovery can get it back. We have recovered many ESX VMware servers for many large and small businesses in the past and we can recover yours too. We also offer 24/7 emergency service for super fast turnaround time.